I watched bits of Voyager here and there when it first came out — enough to remember Neelix, at least — but I think I was still too attached to TNG to accept a new crew.  Now that I’m mainlining the whole show on Netflix, I think I might like Janeway even better than Picard.

I was planning to make the text tiny and barely readable there, but that doesn’t seem to be an option, so assume those italics represent my shock.  Look, I still love Picard in every way possible, including his complete lack of Frenchness.  But Janeway, man.  She embraces her overwhellming resemblance to Katharine Hepburn with full on Gibson girl hair!  She totally has the hot pants for Chakotay, but she’s loyal to Mark!  SHE TURNED DOWN Q EVEN WHEN THAT MEANT GIVING UP AN ADORABLE PUPPY.

Also, she can shoot the hell out of some macroviruses. 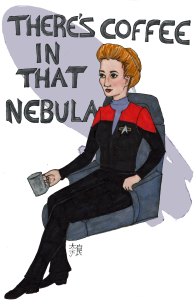 This one and the last two drawings have been added to Teepublic and Redbubble, by the way.  You know, if you’ve maybe been harassing me about that lately, M.