Two things happened to put me in this headspace: Jenny Trout wrote an excellent post about her own struggle with art vs. artist, and this particular rhyme for ‘neurotic’ popped into my head the other day. 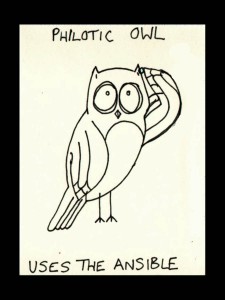 Which brings me to one of my own most problematic touchstones:  Orson Scott Card, and in particular, ‘Ender’s Game’.  I can’t tell you how much I connected to that book as a child.  I’ve read at least 4 copies to shreds in my lifetime, and I’ve read everything else in the Ender series and its ancillaries, a large number of standalone novels and short stories, and a few of the Alvin Maker series, though my brother liked those better than I did.  I think I was already well hooked before I found out that Card was Mormon, but I was still in either middle or high school, and while I knew that the LDS church held deeply upsetting beliefs in regards to women, LGBTQ people, people of colour, and other religions (including ‘converting’ Holocaust victims after their deaths), I was also aware that not every member of a religion believes in all of its tenets.  I had every reason to believe that Card was at least moderate in his beliefs.  His books included a strong sense of love and acceptance of difference, characters of a wide variety of races and backgrounds and religions.  How could the man who wrote Alai whispering ‘Salaam’ and kissing Ender on the cheeks as a sign of their deep friendship be homophobic, or believe his was the only religious path?  How could the tender love scene between Ansset and Joachim in ‘Songmaster’ (one with terrible consequences, but consequences that he makes clear are in no way a result of these two young men loving each other) come from a bigot?

Either I misread his books, or he’s changed, because Card is unequivocally a bigot now.  More, he’s a bigot who uses his money and clout to attack the rights of LGBTQ people, supporting and sitting on the board of the National Organization for Marriage, a well-known hate group, and writing an article claiming to link paedophilia with homosexuality.

So where do I stand now?  I won’t buy any of his new work.  I won’t buy a new copy of ‘Ender’s Game’ when this one disintegrates, but I probably will check used bookstores till I find a replacement.  I refused to see the ‘Ender’s Game’ movie in theatres, but I put it in my Netflix queue after doing the research to ensure that not a penny would make its way back to that man from my rental.  Is that enough?  I don’t know.  I know I’ll never read his books, even his earliest books, again with the same unvarnished emotion I used to feel.  I’ll know, even when I’m crying over Ender or Bean or cheering for Petra, that the author has betrayed them by turning towards hate.

This entry was posted on November 13, 2014 by naralesser and tagged being depressing again, owls, ranty mcranterson.