Special request! Which I sort of failed at.

A certain friend who shall be forever (or at least for this post) know as Lrequested a cartoon with this caption, with Neurotic Owl running off to an adventure.  Simple, right?  I draw more ridiculous things than that ALL the time.

So this is version #6 or maybe 7, because NO is really designed as a character who stands stiffly and awkwardly and hardly ever moves, and I just can’t seem to make him run.  I tried!  I swear, I tried.  Running poses looked like he was sitting, or dancing, or had to pee, but never running.  The only way I could get him to look like there was some kind of running happening was to go off-model and stylize him (differently than his usual stylization), and I’m pretty sure she’s looking for NO classic.  So, fail, but I’m posting this one because I sort of love it and think it’s adorable.

That would probably sound egotistical if I hadn’t just admitted that I can’t draw a cartoon owl running.  Send me one of those ads where you draw the donkey to supposedly get into art school, damn it!  I feel the need to prove myself!

Look, naked ladies!  I can draw those! 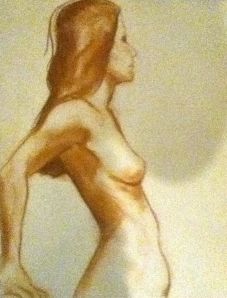 All the stuff a nerd could want?  No problem. 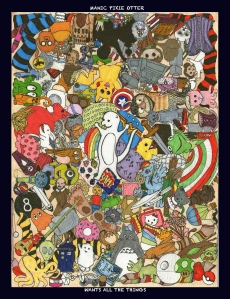 Running cartoon owl, you are my new nemesis.  I shall conquer you!

2 comments on “Special request! Which I sort of failed at.”

This entry was posted on August 6, 2014 by naralesser and tagged anachronisms, NERD!, otter, owls, personal stories you didn't want to hear, ranty mcranterson, self-loathing, the arts, this has already ended poorly.