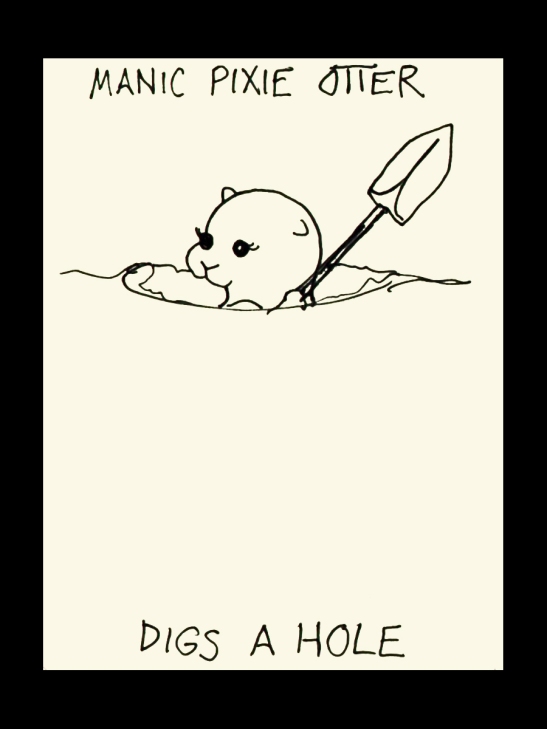 And then I went to work in that hole?  Sorry about the rerun cartoon, but Sylvia Rivera has demanded that I draw her standing in front of the Stonewall Inn, and buildings are haaaaard.  Ugh, straight lines and corners and junk.

But back to my work hole.  I had to call USPS today to ask about a package that has gone mysteriously awry, and the lady on the phone first told me that she couldn’t say where the package was forwarded to because ‘that’s confidential’.  But it’s my package!  It’s being sent TO ME why can’t I know where it’s going whyyyyyy?  And then she told me (VERY snippily) that I never told her it was my package I wanted to track.  Why would I be calling to track somebody else’s box?  Who knows, who cares, moving on.

We establish that it got sent to the wrong post office even though the address was fucking correct, and so hopefully it’s being forwarded to me at work, like it says on the damn box.  Then she asks for my preferred contact method so the supervisor can check and get back to me, and I say that email is better than phone, since I work in a basement and rarely get cell reception. . .

“Well no, basements rarely do.”

“But, but, can you breathe?  I guess, do you have air conditioning?  How can you get air?”

So somewhere in the South, based on her accent, basements are so unknown that she’s basically assuming I’m buried alive, and running out of air, but still super concerned about mail delivery.  THAT PACKAGE WAS MY AIR SUPPLY, USPS.  When I’m all corpsified in this hermetically sealed basement, it’ll be your fault . . . is what I should have said.  Instead I just assured her we have A/C (I’m in Houston, everywhere has A/C) and that I could breathe just fine and got on with my day.

3 comments on “Reruns and stories.”

This entry was posted on April 7, 2017 by naralesser and tagged otter, personal stories you didn't want to hear.