The boke and TERRIBLE jokes.

Like I had to warn you — if it’s your first time here somehow, the cartoons are dumb but cute, the jokes are terrible, the artist is unpredictable at best, but there are fuzzy creatures so there’s that.

Standing by the plan where I just let the ones that go wrong be part of the story. 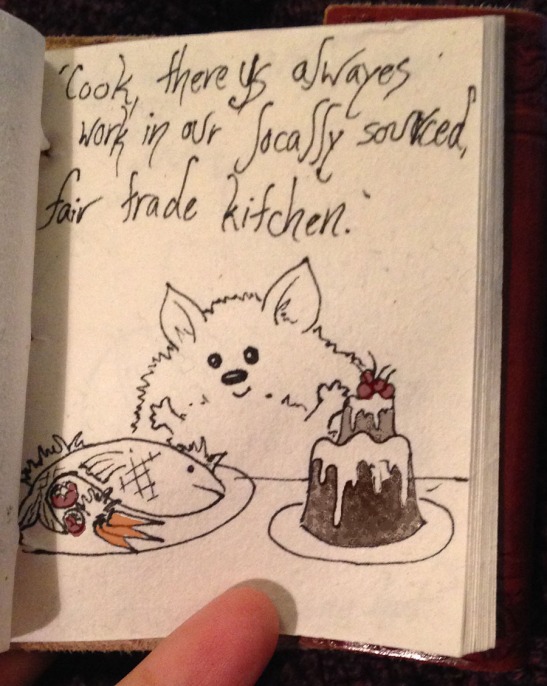 A POTTERY BARN.  I warned you.  BTW, I have been living a kegel-centric life lately because I finally have an ob/gyn who LISTENS to me when I bring up the whole peeing when I cough/sneeze thing and doesn’t just tell me to lose weight, and did you guys know that pelvic floor physical therapy is a thing?  I was all excited to tell every vagina-possessor I know that there is someone whose job is to teach you to do better kegels, but it turns out to be costing a fucking fortune even though they are in network for my insurance.

I’m pretty sure if I were a dude with erectile dysfunction or whatever it would cost little to nothing to get help, but god forbid a woman wants to have a cold and dry pants simultaneously.

And folks with vaginas – can you remember a time when anyone ever actually formally told you what kegels are or why they’re important or how to do them?  Ever?  It definitely did not come up in any of the years of health classes I took in high school.  Gynecologists have occasionally off-handedly asked if I do them as part of the general quick question session, but no one ever really explained them.  At least two female friends were under the impression that they were only for sexual reasons — basically so you can clamp down on that peen better and make your man happy because OF COURSE IT’S ALL ABOUT THE MAN’S SEXUAL PLEASURE, why wouldn’t it be?

And thank god for the internet because I was too embarrassed to really admit that it was a problem until very recently because I had seen so many, many other women saying they had it too.  Guys, WE ALL HAVE THIS PROBLEM.  Now that I’m talking about it I have yet to speak to anyone over thirty with a vag who doesn’t have or hasn’t had this to some degree, and there is no goddamn formal education about it.

ESSCUSE ME, I MUST GO RAGE SCREAM FOR A BIT.

This entry was posted on March 30, 2019 by naralesser and tagged hedgehog, kitten!, owl, personal stories you didn't want to hear, ranty mcranterson, the boke.