Talking to other humans, eep. 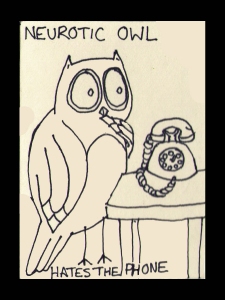 And I agree with him.  Making phone calls is terrifying and a leetle bit panic-inducing and nauseated-making.  In fact, my most hated part of my job is the phone calls — I’m often in charge of scheduling fittings and such for our performers, and the only thing worse than facing 30-50 phone calls every morning is facing 30-50 phone calls to people who REALLY don’t want to hear from me and don’t like the schedule I’ve been handed and keep reminding me that they have jobs, even though the ridiculous fitting schedule is not up to me.

So I was really excited when my bosses decided to make the new assistant the main scheduler and handed her their endless, evil, confusing lists.  Sorry, new girl, but surely you don’t get unhappy tummy from making phone calls too!  . . . and then it turned out that the new girl is primarily a Spanish speaker and her English is shaky (not bad at all, just a little difficult), and making the phone calls fills her with entirely justifiable dread, unlike my mainly irrational fear.  This is where I’d like to say that I volunteered to take over the call list.  What actually happened is that I offered, they said, ‘No, A. does that,’ and now I feel a mixture of thrilled that it’s still not my job (most of the time), and horrible that they’re kind of torturing A because they want to improve her English/get their own way/watch her squirm.  (As always, their decision making process is something of a mystery.)

I do feel a little less bad about it after A thought it was hilarious and weird that I don’t speak Spanish, and said, ‘You should learn!’  Bite me a little bit, A.  I speak a tiny bit — enough to manage when absolutely necessary — plus fairly good French and deeply pathetic Hebrew  (ok, I read Hebrew.  I can’t translate much beyond some basic prayer words).    I’m not being a jerk about your English, which this job requires; don’t be a jerk about my lack of completely optional Spanish, mkay?