And once again, his ice cream dreams are foiled. Mwahaha. 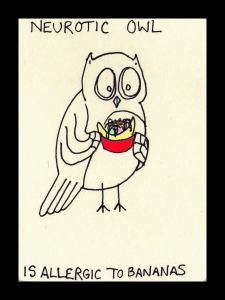 I did not recall until after I drew the latest installment in the ‘Neurotic Owl never gets his ice cream’ thread that I’ve already done a cartoon where he’s simply suspicious of bananas and their horrible, tricksy tendency to sometimes have the aftertaste of bile. 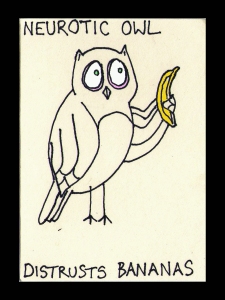 And I know, you’re thinking, ‘He could just scoop the ice cream off the top!  He doesn’t have to eat the bananas!” and that would work if I drew a cartoon called ‘Totally Rational Owl’, but that is not a thing I could draw. 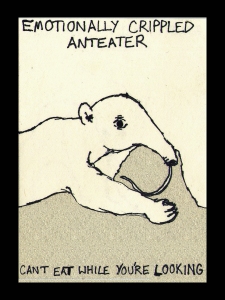 “I scoff at your allergy issues.”

This entry was posted on November 20, 2013 by naralesser and tagged cookery, owls.