And now I’m picturing Manic Pixie Otter smashing out the window of her car, all sexy like. Theoretically. 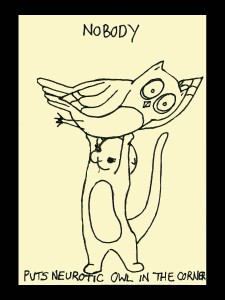 Because no one can argue that Patrick Swayze wasn’t sexy as all get out in that movie, but the window smashing?  That’s just poor planning.  Use your disadvantaged street kid skills to break in with a screwdriver!  Go back to your cabin and make out while you wait for a locksmith!  Make various other choices that would be terrible in terms of a movie!

And before someone says it, she’s not 16, she’s at least 17, which I’m pretty sure was legal at the time.  She says it’s the summer before college, and despite Swayze’s somewhat weathered face, I don’t think he’s supposed to be more than early twenties.  So there.  Stop trying to make my favourite things gross.

‘Revenge of the Nerds’, on the other hand?  Dead to me ever since I realized at 16 or so that the ‘love scene’ was absolutely rape.  Unacceptable, you.

This entry was posted on June 3, 2014 by naralesser and tagged anachronisms, otter, overly long titles, owls, ranty mcranterson, the arts.