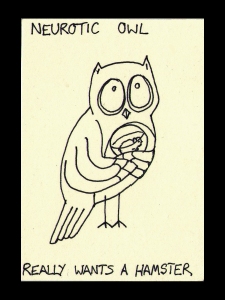 Every time I go to the pet supply store I get snagged by the kitties and the hamsters and the gerbils and the ferrets and ALL THE FLUFFIES, and if I were rich with a huge house they would all come home with me.  In real life, I can’t afford vet bills for two cats, which means I can’t have two cats, and while hamsters and such are much cheaper to care for, they don’t live long enough.  I can’t deal with the idea that Charlie is getting older (he’s 12!), and while I expect/demand at least 8 more years with him, that’s not nearly long enough.  I don’t know what I’ll do.  I mean, I do know, because I’ve been through this before — I’ll be heartbroken, and I’ll grieve, and I’ll adopt again, and I’ll be in love again, but it won’t fill the hole Charlie leaves, because nothing could.

So if I can’t handle that, how ever could I deal with a pet that dies after 1 or 2 years?  Never, that’s how.

Anyway, Charlie would probably try to eat it.  He killed a mouse in NY.

This entry was posted on June 20, 2014 by naralesser and tagged being depressing again, halfway to crazy cat lady, owls, pimpin' my cat.