Tarot #4, The Emperor. I’m being awfully creative with these titles.

For the record, I’m trying to keep the titles easily searchable in case someone wants that.  I’m also using a useful tag for once, instead of my usual whimsical disregard for searchability.  It’s almost like I’m a grownup, albeit a grownup who draws hedgehogs in crowns. 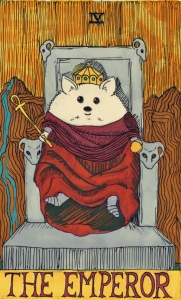 Anyway, this one isn’t about the character’s personality matching the card, because I don’t really have a character who suits.  It’s about his stumpy little legs waggling on that throne. (Although a chef is the emperor of his kitchen, so there.)

This entry was posted on January 28, 2015 by naralesser and tagged hedgehogs, overthinking, tarot.