Saturday! Book suggestions, since I’m busy and such.

Sheri Tepper’s books are all amazing and brilliantand will open new windows in your head, but I especially recommend Gibbon’s Decline and Fall if you loved The Handmaid’s Tale, and The Fresco if you want to laugh and cry simultaneously.  No lie, the ideas in The Fresco helped reconcile my issues with Reconstructionist Judaism.  It did exactly the opposite for a friend, and both reactions are entirely valid.  If Tepper doesn’t at least make you rethink your feelings about religion and its place in the world, you’re not listening with open ears (Reading with open eyes, whatever — it’s my party and I’ll use terrible metaphors if I want to).

In a totally different category, there’s Mairelon the Magician by Patricia C. Wrede.  Again, love all of her books, but this is the one that I loved and read so many times when I was younger that I totally made up a sequel in my head that I was convinced existed — a different sequel than the one that does, in fact, exist, and which I only just found & read last year.  It’s a delightful YA about a young thief in an alternate version of Edwardian England who gets sent to break into the wagon of a real magician. 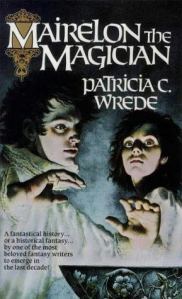 So those are the three-four that first popped to mind, but there are sooo many more!  Well, you saw my bookshelves, you know I can’t pick just three.  I’ll have to do this again sometime.

This entry was posted on June 22, 2013 by naralesser and tagged anachronisms, grade whore, kind of advertising?, NERD!, non-owl.