In which I obsess about completely meaningless things. Again.

I was so close to calling it quits on this and saying that I was out of ideas, and then the night before last I drew SOOO MANY cartoons, so never mind.  Plus I have a plan for a new character, so there’s that.

Anyway, there was this really cute thing going around on teh Facebook, and as an admitted Shakespeare nerd and self-loathing MPDG it should have been right up my alley, but because I am crazy, I had a minor quibble that destroyed it for me.

This is clever and wonderful and delightful and THE BRITISH CALL IT THE HOKEY-KOKEY.  Not P, K.  Or possibly C, I haven’t seen it written down, but definitely a ‘kuh’ sound.  So. 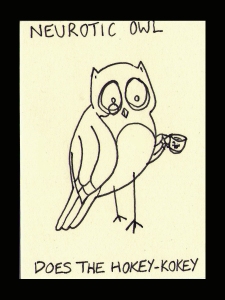 The monocle and tea are to express his British-ness.

There.  All better now.