Nope, THIS is the worst pun.

I won’t give the name of the person reponsible, I’ll just say that *somebody* commented on Facebook about my family having a history with ‘deserts’, and instead of being a nice person who knew she meant ‘desserts’, I decided to go with the obvious Jew joke.  And now I’m just rubbing it in more.  I’m the worst. 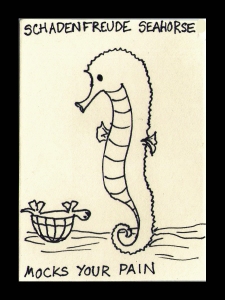 Well, okay, I’m not that bad, but I still kind of suck.

Probably about that level of awful.  In my defense, she’s an ex-librarian and can, I think, take a mild typo joke, since she does actually know how to spell dessert.  I do try to keep track of which of my friends are legitimately dyslexic and not correct them, because that is a level of dickishness I hope never to achieve.

This entry was posted on December 3, 2014 by naralesser and tagged and you shall be my squishy, cookery, for the glory of Hufflepuff!, NERD!, otter, paronomasiacs, personal stories you didn't want to hear, seahorse, self-loathing.