No mules were harmed in the making of this doodle. 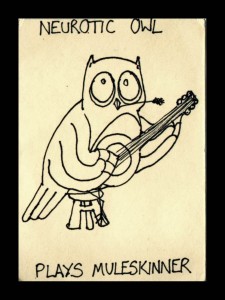 And before you shriek in horror, a muleskinner in this context is just a dude (or chick, presumably) who drives mules.  A muleteer, if you will.  Like a Rocketeer but less steampunk and more fuzzy ears.

This isn’t going to turn into a long post or anything, I just like bluegrass and related music.  I was playing my brother a few of my newer favourite songs last weekend — ‘Della and the Dealer’, ‘Ballad of Billy Joe’, etc. — and he pointed out that I seemed to be a fan of that sort of twangy roots music where it crosses over with the 1960s and 70s, and we got to talking about why I love folk music, which leads to embracing the somewhat funkier and rawer bluegrass sound, and where I draw the line re: country music, which is basically at the Dixie Chicks and their ilk.  Because as much as I may mock the majority of current country music, I love Janis Joplin, and sooner or later you have to accept that those two sounds come from the same base.

BTW, if anyone knows where I can find a recording of Hoyt Axton singing Della and the Dealer with just his guitar (the way he sang it on WKRP in Cincinatti that one time), I will be your bestest friend for a goodly while.

This entry was posted on August 29, 2014 by naralesser and tagged anachronisms, hipsters, owls, personal stories you didn't want to hear.