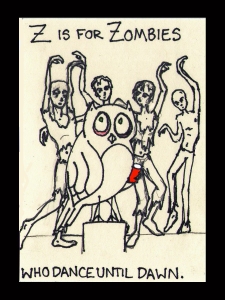 Just to be clear, the scary part of this isn’t the zombies — it’s being stuck at a dance party.  Alone.  Foreeeever.  If I believed in hell, that would be it.

So, that’s that.  I feel like I should have a bigger finish or something, but I’m not big on endings.

P.S. – If you’re interested, you can get a poster of the full alphabet here.  I’m gradually adding more work to redbubble – they’re not super cheap, but they’re much easier to deal with than Zazzle and it looks like they do nice work.  If I find somewhere to do it as a leetle book, I’ll let you know.