Darn, I forgot to add some glitter. 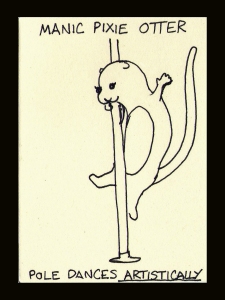 I swear someday I’ll stop picking on bitchy Austin girl who haaates Houston and luuuurves Austin and tried to convince me that eating quinoa was the worst thing you could do and starves Bolivian farmers and hates the homeless, but LOVES pole dancing, but today is not that day.  Seriously, it took only the tiniest link to get her going forever about ‘twerking’ and some horrifying thing she referred to as ‘booty-clapping’, which I am most grateful I don’t really understand, and that’s fine.  You be you.  Pole dancing is a really hard workout from what I’ve seen, and why not embrace a little bit of sexy fun while you get healthy?  The problem is, if you dared to suggest that pole-dancing – or simply pole, as she called it – was ever, once upon a time, even a little tiny bit, related to what strippers do, out would come the upturned nose and the angry rant.

Now, I’ve seen video of pole dancing as sport, and it is remarkable and not at all about sex.  However, I’ve never seen any of those dancers twerk.  More importantly, if you’re going to reclaim something as a form of art, fine.  Go to it.  But don’t pretend that it doesn’t have roots elsewhere.  Don’t simultaneously spend all your time pole dancing and slut shaming strippers.

I’m not a big fan of country music, but I love folk and I enjoy a lot of bluegrass, and so I’ve had to reconsider my anti-country rants because the music I like is not unrelated.   Stop listening to Blurred Lines, or stop bitching about Miley Cyrus, because you can’t have it both ways.  Actually, ideally, stop listening to that rapey disgusting song AND stop bitching, because really, don’t you have better things to do?  I’m not saying that pole dancing makes you a stripper — I’m saying, either accept that you’re doing a thing primarily associated with strippers, or shut up about it.

This entry was posted on October 16, 2013 by naralesser and tagged AUUUUSTIIIN!!!! (like Khan, but ragier), hipsters, I don't know from sports, non-owl, otter, ranty mcranterson, self-loathing, this won't end well, video.